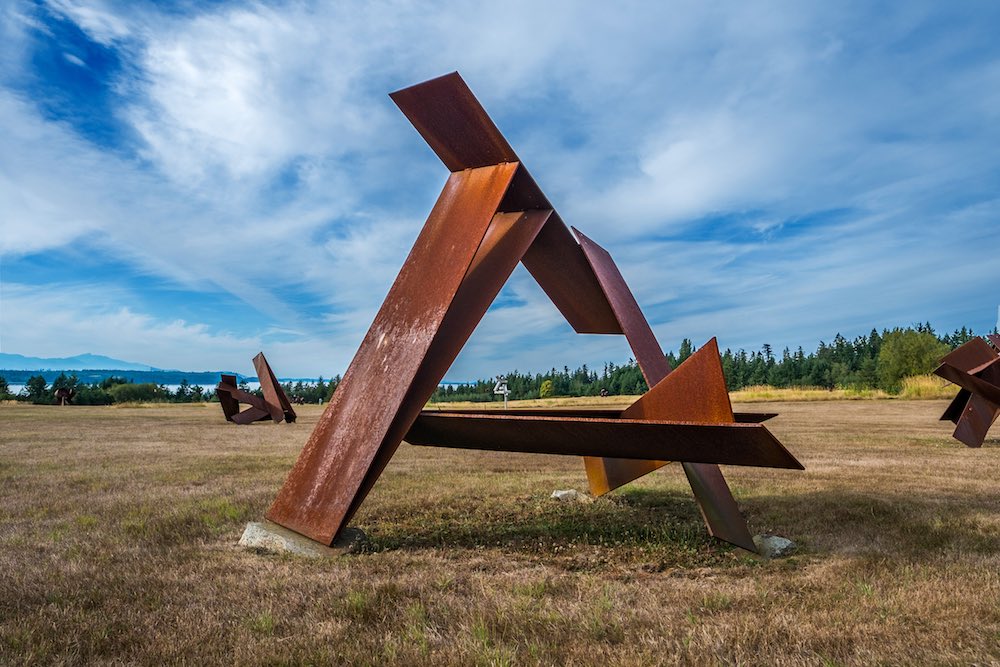 ABOUT THE SCULPTURE PARK

First opened to the public in 2008, the 200 hectare Jeffrey Rubinoff Sculpture Park is home to a collection of over a hundred of Jeffrey Rubinoff’s sculptures. The Park is situated on a farm purchased by Rubinoff in 1973 for the purpose of the creation and storage of his work. Rubinoff repurposed its barn, originally built in 1889, into a fabrication and casting studio, and worked there from 1980 until his death in 2017.

After growing terminally frustrated with the vacuousness of the art market, Rubinoff started siting his sculpture at the property permanently in 1998, bolting some of them down to granite slabs. This was when the idea of the farm becoming a permanent display of his life’s work began to take shape, though Rubinoff had already been working with landscaping contractor John Kirk to reshape the land to create display mounds and berms, plant over 1000 trees as well as dig drainage streams and 35 ponds. The Park was finally established with the registration of the Jeffrey Rubinoff Sculpture Park Society in 2005.

In late 2006, Rubinoff began working with Karun Koernig on a programme of activities, beginning with an annual symposium, and planning for regular concerts and openings. In 2007 work began on the interpretive centre. It was designed and built by Hornby Island’s Blue Sky design, who completed the project in 2008. Since then the scope of activities has increased dramatically from summer openings, tours and concerts, to university courses and highschool groups, photography classes, and the annual Forum.

Toward the end of Rubinoff’s life he also endowed a post-doctoral fellowship at Cambridge University, a doctoral scholarship at the University of Victoria, a number of other scholarly awards, and a book publication programme. These are all aimed at strengthening the perception of art as a source of knowledge, a purpose to which Rubinoff he dedicated all of the work of the Jeffrey Rubinoff Sculpture Park. As Rubinoff stated at the outset: “Our purpose is extend the ancient narrative of art and consequently rekindle the historical spirit of modernism. In addition to viewing the work, which includes the Sculpture Park itself, the goal is to revive the interdisciplinary creative impetus of early modernism and to attain the understanding of art as a serious and credible source of special insight for the evolution of ideas.” 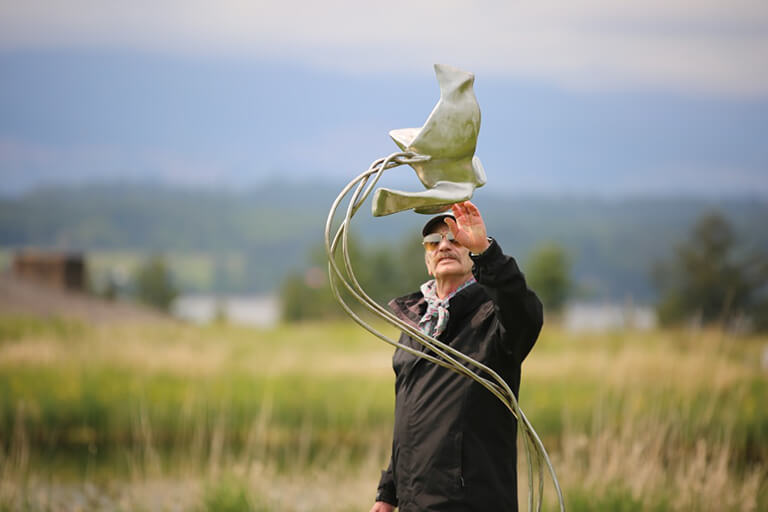 Jeffrey Rubinoff was born in London, Ontario, in 1945. He studied fine art in the United States and completed his Masters of Fine Arts in 1969. On his return to Canada, he pursued an artistic career in both countries, including solo shows at the (Helen) Mazelow Gallery in Toronto, the Ontario Science Centre in Toronto, the Nathan Manilow Sculpture Park in Chicago, Queen’s Park in Toronto, and York University in Toronto, as well as being shown at Marlborough Gallery and Two Sculptors Gallery in New York.

In the early 1970s, Rubinoff moved to a 200-acre farm on Hornby Island in British Columbia, living and working on-site for the next four decades where he created the majority of his work. His sculptures range from the human to monumental in scale and are created exclusively from welded or cast, stainless and cor-ten steel. Rubinoff created his sculptures unassisted. His studio included a one-person steel foundry, which made it possible to cast the organic forms found in his later series. In addition to the sculpture, Rubinoff designed many landscape alterations to his property in order to better suit the exhibition of his sculpture.

Regarding the dominant art of his time, Rubinoff stated: “For my generation of artists, culture was defined by marketing. The art market defined originality as novelty. I realized that to make original art with artistic depth I would have to return to the lineage of the ancestors—the history of art by artists. So began a dialogue with the ancestors, artist to artist via the work itself.”

“I was born in the shadow of the endgame.
I am an artist.
Art is an act of will in accord with a mature conscience.
There can be no resignation.
The artist is witness to existence itself.
Art is the celebration.”
– J. Rubinoff

Jeffrey Rubinoff believed that art could help navigate the human soul without the need for prescriptive narrative for the knowledge it discovered. He viewed this rare characteristic as inherent in all great art and as necessary sustenance for a mature conscience. Contrary to the prescribed narratives of tribe, nation or religion, art could satisfy the human sense of the sacred without the social divisiveness. In creating the sculpture park, Rubinoff sought to assert this highest calling for art—in perpetuity. Throughout his career, Rubinoff hoped he would find this vision more widespread and, by necessity, sought it through a deeper engagement with his artistic ancestors. Rubinoff understood art to be a source of knowledge because of its capacity to influence the viewer’s perspective by means of original perceptions. Through his art, Rubinoff’s complex and original ideas endure, speaking to ours and future generations. And through his writing (click below to read more), further insight can be gained into his views on the role of art within history and society.

Rubinoff on Art: The Collected Writings of Sculptor Jeffrey Rubinoff

Rubinoff’s Insights and Arguments about art

Insights evolved with and from Rubinoff’s work: 2011 edition

On the purposes of the work and the sculpture park

Art Beyond War: A Discussion About Prehistoric War and the History of Art by Artists

Through the Lens of the Endgame

Rubinoff’s Introduction to the 2010 Forum

Rubinoff’s Introduction to the 2011 Forum

Rubinoff’s Notes on the 2012 Forum

Commentary by Rubinoff during the 2009 COI Forum

Commentary by Rubinoff during the 2010 COI Forum

Commentary by Rubinoff during the 2011 COI Forum

An Introduction to the Jeffrey Rubinoff Sculpture Park by Dr. James Fox

Since 2008 Karun has been the manager and curator of the Jeffrey Rubinoff Sculpture Park on Hornby Island, BC, Canada, which displays a large collection of sculptures by the late artist Jeffrey Rubinoff. There he organizes tours, publications, and symposia, in addition to managing public access to the 200-acre parklands.

Before that Karun worked with the United Nations artist ambassador program based in Kenya, planning major public concerts in Rio (Brazil), Shanghai (China), and Istanbul (Turkey). More recently Karun designed a large display unit for exhibition at an international conference in Kuala Lumpur (Malaysia), which explored the use of the arts within an experimental ‘Youth Peace Laboratory’ in Colombia. Karun Koernig holds a master’s degree in International Relations from Cambridge University, with a specialization in cultural diplomacy and soft power.

Dr James Fox is British art historian and BAFTA nominated broadcaster. He is a Research Fellow in History of Art at the University of Cambridge, specializing in 20th century art. Fox is also a BBC Arts television presenter, with past programmes including The Art of Japanese Life (2017), Who’s Afraid of Conceptual Art? (2016) and A History of Art in Three Colours (2012). He was selected as one of Apollo Magazine’s ’40 Under 40′: the ‘most talented and inspirational young people who are driving forward the art world today’. Fox heads up the educational programme at the Jeffrey Rubinoff Sculpture Park, convenes an annual forum, oversees the JRSP Postdoctoral Award Program, and is the editor in chief for our major publication series on Art and Knowledge.

John McGillivray lives on neighbouring Denman Island and provides year-round maintenance of the park, lands, buildings, and equipment. He is an avid cyclist, kayak enthusiast, and was a volunteer member of the Denman Fire Department. McGillivray maintains various properties on Hornby and Denman and spent many years driving the Denman school bus. McGillivray holds a BA.

Zoe Tokarchuk is a Museum Anthropology student at the University of British Columbia. Throughout her degree she has explored the history of modernism, the anthropology of art and media, the role of art in culture, and museological practices and ethics. Tokarchuk has worked as a park attendant at the Sculpture Park for several years, and is working this year as the Summer Assistant Curator with the support of the Government of Canada’s Canada Summer Jobs Program. Her responsibilities are to assist the curator to research, write and produce interpretive materials, exhibits, and tools related to the sculpture collection, as well as educating the visitors and the public on the work and ideas of the sculptor, working with arts educators, hosting park visits and giving tours, and organizing and maintaining the archive.